Written by Kody Page, Assistant to the Elementary School Pastor

I have a confession to make: I love the beginning of a New Year! I love dreaming of what things will be like a year from now. I also enjoy looking back at how marvelous the last year was everything that was accomplished. One thing that I can’t help but think about is that this time last year, I was 55 pounds heavier than I am right now. 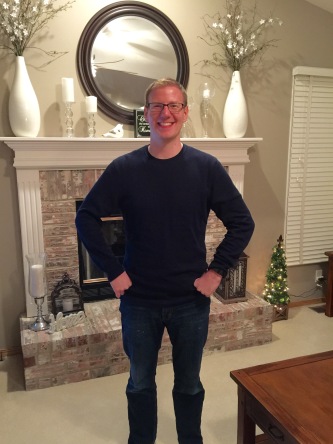 That’s right, in the last year, I have lost 55 pounds! A lot of times I will get asked, “How did you do it?” and I’ve never really had a great answer. I stopped eating food that I knew was terrible for me and I started going to the gym to run 3-4 times a week. I didn’t struggle so much with the “eating right” side of things, but when it came to the gym, that was a whole different can of worms.

I have never been super athletic (or in shape for that matter). I can remember when I was a kid I used to run kind of funny (like I had a cape and I was flying) and other people let me know about it. When I was in high school, I went on a weightlifting machine that could be confused with a torture device. I had no clue how to use it so I thought, “I’ll just stack a bunch of weight on it and go to town!” Nothing could go wrong with that right? I ended up getting stuck in the most awkward pseudo-squat position with no hope of being able to push myself back up! A couple of big, burly, muscular manly-men saw me in distress and rushed to lift up the weights so I could once again stand. When I was free, I was so embarrassed that I picked up my bag and walked right out.

So all that to say, in May of 2015 when I stepped into a gym for the first time in years, I had all of these failures replaying in my mind. I started to ask the “what if’s.” What if everyone notices I am out of shape? What if I don’t have the right clothes on? What if I don’t know how to use the machine properly and I make myself look fool once again?

And you know what? At one point all of those things happened. I was out of shape. I didn’t have the best clothes for the job. I used a machine incorrectly. But, none of that mattered. It didn’t matter because I realized I was surrounded by people who were asking the same questions and struggling with the same issues. Sure, there were people there who were farther along the journey. But everybody that was there was working towards a similar goal-to become more fit.

When I work out now, I am literally surrounded by people who are cheering me on to meet my next goal. They challenge me to do things I’ve never done before. They support me when I fail, they call me out when they see me slipping on my plan, and they correct me when my form is wrong.

I think of the story of Zacchaeus from Luke chapter 19. Zacchaeus was a chief tax collector, or the IRS of his time. He was considered the scummiest of the scum. He had stolen and cheated people out of their money. Zacchaeus was spiritually unfit. But Jesus saw him and went to his house. After Zacchaeus had an encounter with Jesus, his life was totally different. He gave half of what he had to the poor. And to anybody he cheated out of money, he paid them back four times the amount!

Luke 19:9-10 says: Jesus said to him, “Today salvation has come to this house, because this man, too, is a son of Abraham. For the Son of Man came to seek and to save the lost.”

One thing I can’t help but notice is that Jesus went to Zacchaeus when he was still a sinner. He didn’t say, “Go get your life right then come back and see me.” He met him where he was.

So with all that said, I am thrilled to be starting off this year 55 pounds lighter than I was last year and more physically fit than I have ever been. But I am challenged too. Just as I get excited when somebody who is out of shape comes to the gym for the first time, I get so excited meeting somebody who is far from God! Why? Because “The Son of Man came to seek and save the lost,” and that is who I am learning to care about.